The weather is taking a significant and protracted turn for the cold and wet. And you’ll notice the overnight low on Friday is a chilly 33F. Its fair to assume the first frost will greet us Saturday morning.

With all that in mind, things have kicked into high gear in the interest of safeguarding plants and finishing projects. I may not be mentally ready for this, but the garden will be!

The Fig and the Orange are permanently in the greenhouse until they finish ripening their fruit, though that alone won’t be enough after Wednesday night. I’ll have to plug in the space heater again, while still trying to remember to open the doors during the day. The tomatoes will stay on until there is actual frost, the dahlias won’t get dug until then either. The remaining potted pelargoniums will be left to fend for themselves and the Banana and the Bouganvilla will be moving inside a fair bit sooner than I had hoped.

Clearly, this one week of damp cold does’t mean the sunny, nice days are gone until next year. But it just may. Such is the tempestuous nature of the Midwest…

Monday was slow at work so I took the half day to get the new Dry Cottage Garden bed dug up and get the remaining potted plants into the ground. 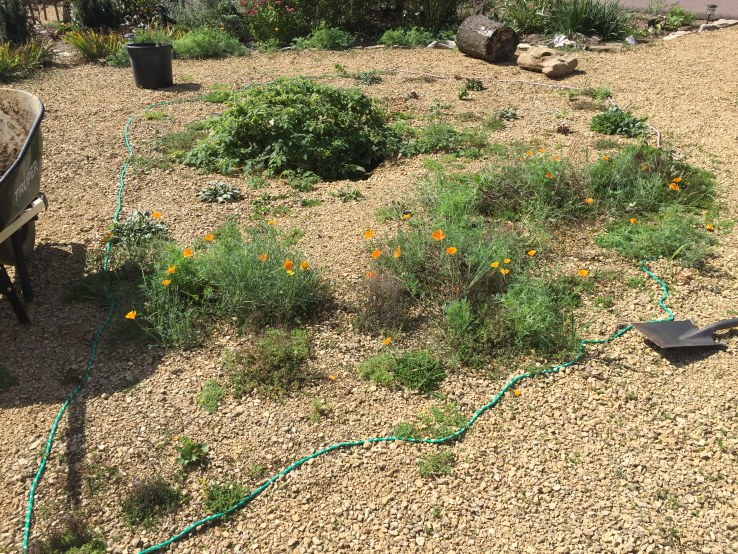 So many weeds! But that big green mound at the top was the location of our fire pit. Since its been moved its only gathered more and more weeds. The rope outline was the intended border of the new bed. Something paisley or teardrop in shape. 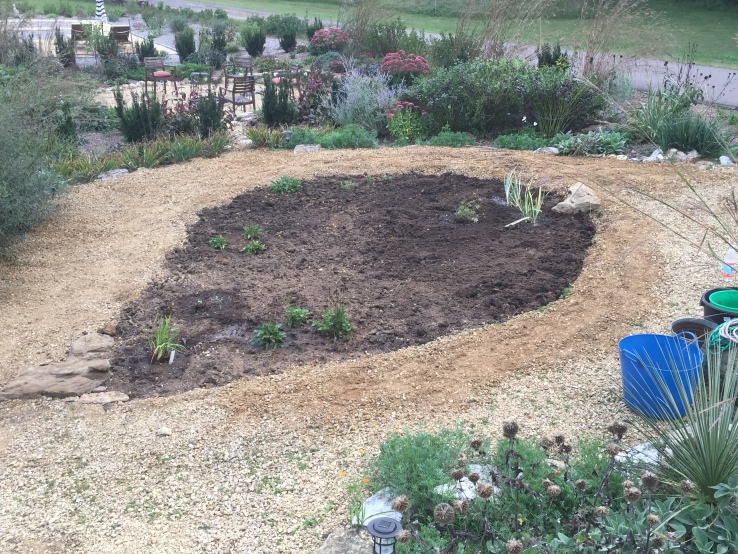 That is what 5.5 hours of clearing gravel and breaking up the quite compacted soil will leave you with (with a few breaks in between!). I cannot tell you how happy I am that this is done!!! Obviously we didn’t have enough rocks to edge the bed, but I’ll get more once we head to Minnesota in October. I have a secret stash and farmer approval to “take it all!”. If the weather bounces back even a little I should be able to tick off that box before the snow flies.

Every one of the lingering potted plants got put in and I even discovered a few freebie volunteer Russian Sages and Baptisia plants. I’ll clearly need to bulk up the plantings next Spring, but this gives me plenty of time to think about what the vertical element should be here- tree, structure, obelisk, fountain, sculpture- and make plans to get that in place ASAP next year.

The worst part of this project was that my trusty four tine border fork kicked the bucket.

I’ve been told by a friend that this is fixable, but I’m not inclined to believe we have the tools to actually accomplish a repair. She’s been a steadfast sidekick in the garden for 4 brutal years of use. She’s turned over every square foot of dirt that’s been turned up on this property. She’s hauled mulch, turned compost, and weathered plenty of abuse. I shall miss her (though she may get a place of honor in the greenhouse).

Given the coming weather (and that this project is actually done as far as digging goes) I’ll hold off to research new ones with forged heads for next year. Let me know if you have suggestions!

The side benefit of installing this bed has been that I could use all the extra gravel to level out the paths a bit better. There is ‘new’ gravel around the whole edge of the bed and I’ve feathered the edges with a rake to make it more seamless looking. A good rain or two and you won’t be able to see the difference, but you will certainly be able to feel the difference in the paths. 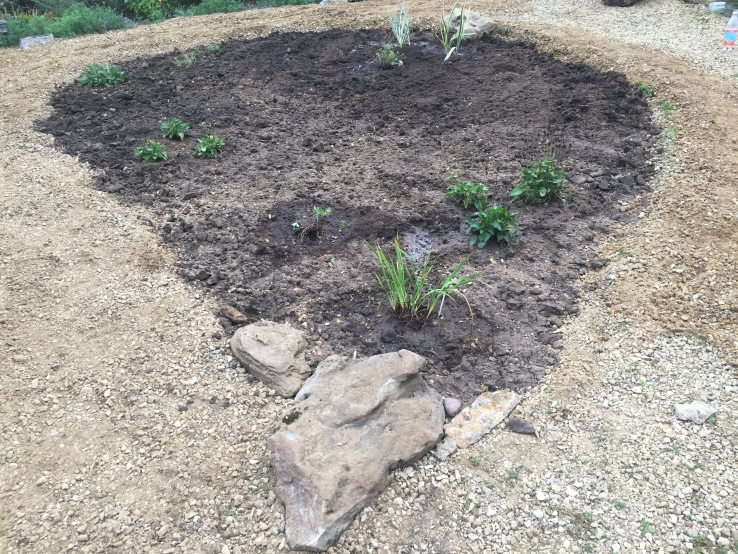 And now I’m off to relax my tired shoulders and have a well earned cocktail, pleased with both myself and the new bed.

5 thoughts on “The Coming Chill.”