Bear with  me, this one might be a bit wordy and it will most certainly wind up as a reoccurring subject.

The Dry Garden was the first space (other than the Veg garden) that we planned and installed. Its 3 years old this summer and, while it is doing well (mostly), I’m not sure the ‘end’ result matches up with my initial intentions. I’m afraid we are in for a bit of a do over.

Of course this doesn’t mean that the garden isn’t successful or that I’m thinking we need to dig it out and start over. I’m not that crazy. But I do think it might be time for me to come to terms with my lack of success in creating a distinctly Mediterranean garden.

The honest truth is that somewhere along the line, probably in my efforts to make the space feel full and lush, I ended up much closer to Sunny Pseudo-Cottage Garden. A good part of this stems from the simple fact that in zone 4, there isn’t as much material to work with as I would like. Sure, the gravel and the yucca and lavender shout “MEDITERRANEAN!!!”, but most everything else I’m able to grow is only ever able to muster meager “I might be Mediterranean if it is really hot and you squint. A lot.”.

None of these are problems, but it does mean I need to re-calibrate both my expectations of what the space SHOULD look like and what my plans are going forward. I think the former is going to be much harder than the latter.

The original color scheme was always intended to be purple and silvery with punctuations of orange. This was my initial source image when I got the idea in my head and I was sure I could recreate it. 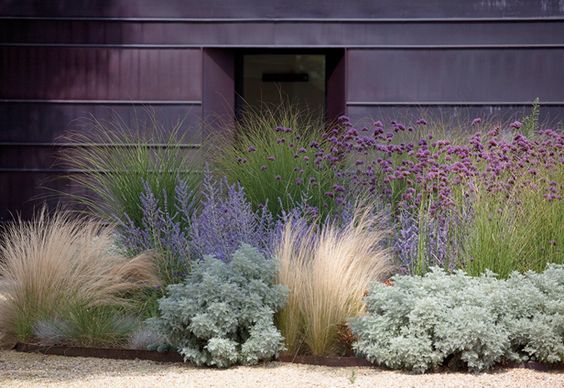 Alas, I have not. And that might be for the better. Three years later and this image doesn’t excite or speak to me in the way it once did. I suppose that is normal- for one’s tastes to evolve- but I also chalk much of it up to inexperience and latching onto the first idea I liked that I also thought would work in our conditions.

I also think a lack of a true understanding of our conditions helped play into my insistence that a Mediterranean-style garden would be the only thing that worked. Blazing full sun, scorching heat, sandy soil. At the time I saw those three things and reasoned that only Mediterranean plants and garden styles would work here. Yes, all those things are still true today, but we also have a shocking amount of fertility in our sandy soil and we also get 31″ of rain every year. Despite the heat and sand- a Mediterranean garden this is not.

At the risk of being incredibly predictable or (as the kids say) Basic, I think the more honest inspiration for this space is Monty Don’s Jewel Garden. A loftier goal I can’t imagine for myself, but this picture feels much closer to both what we have and what I want.

And much of this comes down to what is thriving in the garden after 3 years and the impact its had on my initial vision.

The retooling of this garden is something I believe I can do yet this growing season. My plan is to 1) identify exactly what isn’t working (and figure out why), 2) figure out what new additions will fit the above brief, and 3) installation this fall.

I plan to do some more in-depth posts about this process and, with any luck, source some great ideas from you brilliant readers. Stay tuned…

2 thoughts on “Dry Garden Do Over.”