Sigh. Gravel paths, I cannot quit you even though you are (apparently) a better seed-starting medium than anything that can be bought in a store.

I opted for gravel paths at the outset of this garden simply because I knew the paths couldn’t be grass (what with all the quack grass running through it, our less than hospitable conditions, and my unwillingness to give turf the care it deserves/needs). Since the paths would all need to be quite wide (given the location of the garden on the lot, we traverse it with wagons and wheelbarrows regularly), paving them would have cost a fortune (a FORTUNE I tell you!) and taken ages to install ourselves. Plus we get such deep, hard frost that heaving and settling would have been an issue almost immediately. So gravel paths it was.

I chose a compacting driveway base with the thought that tamping it down tight would prevent weed seedlings from gaining purchase and it would drain well enough to deplete said seedlings of water. We also wanted something that would be a firm, easy to traverse surface. Pea gravel looks amazing, but try pushing a wheelbarrow through it. You cannot (unless you are maybe The Rock?).

The driveway base does tamp down beautifully and it is incredibly easy to run even the heaviest of wheelbarrows across it. It looks smooth and even, the color is lovely. But it does not prevent purchase of weed seedlings and it does not deprive them of water. Instead, it provides ideal sprouting conditions for every. single. seed. that drops onto it.

I bought a flame weeder (which I do love and find very helpful) early last year to become my primary tool for weed suppression. It works. Sort of. It is gangbusters on specific weeds at a specific age. But it doesn’t work well enough to keep the weeds at bay without using it multiple times a week.  Perennial types inevitably bounce back with a new flush of leaves and the littlest grasses somehow gain shelter from the surrounding rocks and come back with renewed vigor.

I considered renting a professional-grade tamper to really smash the heck out of the paths in the hopes of making it more concrete like and less seedling friendly. But honestly, would that REALLY make things any better? Probably not. So I started searching for a better tool to tackle the weeds.

Currently, we’ve been using low-budget but sturdier Hori-Hori type knives to go at them one at a time. They are especially effective against dandelions. But looking at an expanse of gravel, knowing you have to get all the weeds out one at a time, that is some disheartening (and boring) stuff.

As I mentioned last week, I came across a new (to me) style of hoe that seemed like it would work very well in the gravel. I bought it. I used it. It is very effective (especially for $33). But Holy Hannah, getting that sucker going into the compacted gravel is a killer workout for your arms. Oy. 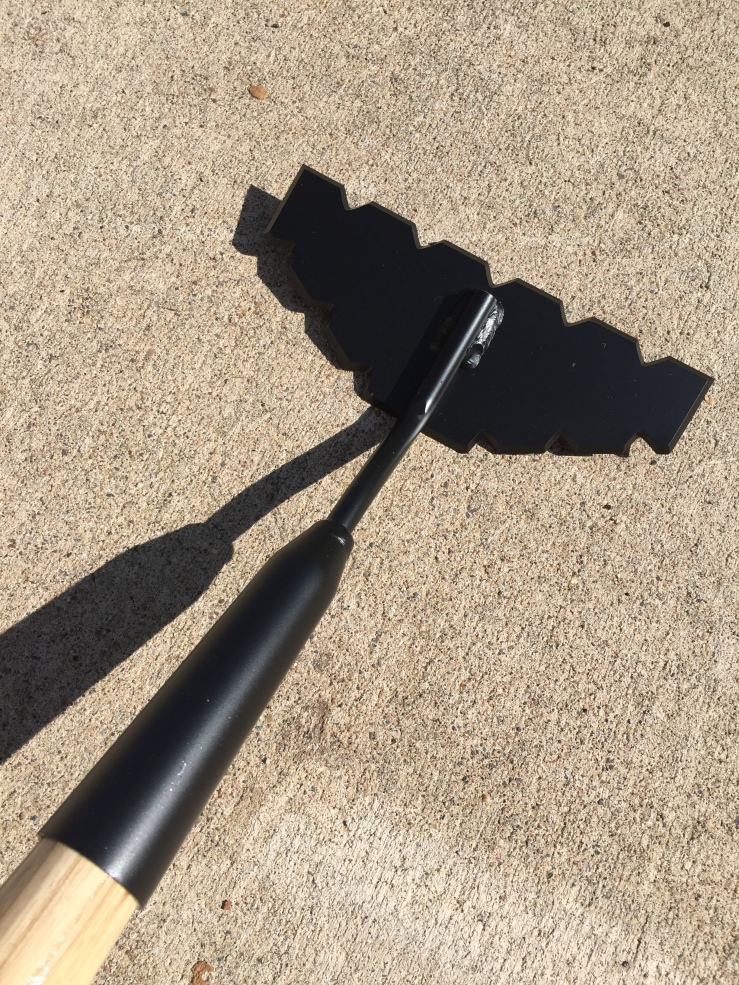 It got me thinking that, while the tool is easy enough in concept, the execution in compacted gravel is rough. Is the solution to leave the gravel (or at least the top inch or two) UNcompacted?

I’ve been doing a bit of a trial-run with this looser gravel and, so far, it seems to be working. The gravel underneath the top inch or two is still super firm which means the wheelbarrow runs over it just fine and it doesn’t have that quicksand feel that pea gravel can sometimes have underfoot. It also means that running the hoe under the loose stuff to chop the tiny heads off of any new weeds is extra easy.

Before and After. The look is a bit different and certainly has a more casual feel to it. I do end up doing some raking after the hoeing to even the gravel back out. Its just like raking gravel in a Zen Garden, only less meditative and no fun patterns.

I’ve also been keeping the hoe out in the Veg Garden where it is extra handy. That way, whenever I see a flush of green in the gravel, I can tackle it while it is still young and defenseless before I forget. Its a pretty regular job, which I don’t love, but it does mean I can fall back in love with my gravel paths and it is rather easy. Just don’t ask me if I’ll still use gravel in our next garden…

7 thoughts on “On Gravel Paths.”